<Back to News
February 26: Tennis champion Mary Joe Fernandez to speak at HB 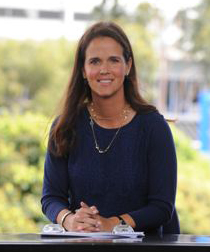 Members of the general public are invited to hear tennis champion, ESPN and CBS analyst, and two-time Olympic Gold Medalist Mary Joe Fernandez at Hathaway Brown School on Wednesday, February 26, 2014, for the final Learning for Life Speakers' Series presentation for the 2013-2014 school year. The program is presented by the Hathaway Brown Parent Association.

Fernandez will briefly discuss the value of competition, the benefits of sports participation, her career in sports and sports commentary, and what it's like to be a working parent before she opens the floor to questions.

The presentation will begin at 7 p.m. on February 26 in The Ahuja Auditorium at Hathaway Brown School, 19600 North Park Blvd., Shaker Heights, OH 44122. The event is free and open to the public, but registration is required. Street parking is available.

ABOUT MARY JOE FERNANDEZ
A former professional tennis player, Mary Joe Fernandez serves as an analyst on tennis events for ESPN, ESPN2 and CBS. Born in the Dominican Republic and raised in Miami, she enjoyed a successful career on the WTA Tour, with seven career singles titles, 17 in doubles, and being ranked as high as #4 in the world.

Fernandez first came to the tennis world's attention as an outstanding junior player, winning four straight Orange Bowl junior titles. In 1985, at age 14 years and 8 days, Fernandez became the youngest player to win a main draw match at the US Open. The following year, Fernandez turned professional. Before she retired in 2000, she compiled a 437-203 record. In doubles, she was 344-141.

She appeared in a Grand Slam final three times – Australian Open (1990 & 1992) and French Open (1993). She also enjoyed success in doubles, winning two Grand Slam events (1996 French Open with Lindsay Davenport and the 1991 Australian Open with Patty Fendick) and 19 WTA doubles titles. In addition, she and Gigi Fernandez (no relation) won the Gold Medal in Doubles at the 1992 and 1996 Olympics. She won the Bronze in singles in 1992 and was a member of the winning United States’ 1996 Fed Cup squad. In December 2007, she was named Coach of the U.S. Fed Cup team, and was elevated to Captain in 2009. Fernandez also coached the Women’s US Olympic team in 2012.