<Back to News
Swimming & Diving team celebrates a great season 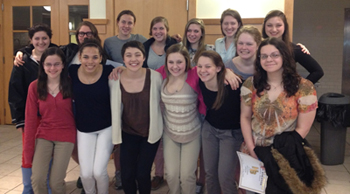 These student-athletes celebrated a meaningful awards ceremony on March 12 and the following honors were presented:

As a whole, the team overcame many obstacles throughout the season and racked up many accomplishments. They spent three tough weekends in a row competing at the Sectional, District, and State levels.

At the State meet, Gudbranson, Stewart-Bates, Forsythe, and Hall represented HB admirably. Gudbranson, a senior, ended her high school career on a high, qualifying in the top eight in both of her events. Stewart-Bates had a solid 15th place finish in her 500. Forsythe swam a season-best time in the competition, and the 400-free relay team also posted a season-best time, with all four swimmers holding her own.

"I’m proud of every single one of these girls, as everyone posted many lifetime best times throughout the year," said Varsity Swimming Coach Lindsey Ahrens. "They worked hard, even when they were so tired they couldn’t lift their arms up over their heads."

In the District competition, the relay team of Click, Bashour, Mullen, and Forsythe dropped four seconds, which is practically unheard of in swimming. In Diving, Zeilinger improved on her own previous best 11-dive score. Going into the District meet, the Blazers were projected to finish near 16th place. In the end, they were ranked sixth. "It was an amazing meet for our team," Ahrens said.

Congratulations to all of this fantastic student-athletes on an outstanding season. Special thanks as well go to their coaches: Head Coach Lindsey Ahrens, Assistant Coaches Nicky Trebec and Tina McCauley, and Diving Coach Lewis Fellinger.