Hathaway Brown School is excited to announce that five Upper School students have been named semifinalists in the 2009 Intel Science Talent Search. 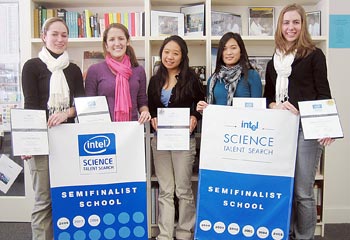 Sometimes referred to as the "little Nobel," this prestigious award commemorates one of the highest accomplishments a United States high school student can achieve. According to its website, the Science Talent Search is America's oldest and most prestigious science research competition for high school seniors. Since 1942, first in partnership with Westinghouse and since 1998 with Intel, the competition has provided a national stage for America's best and brightest young scientists to present original research to nationally recognized professional scientists.

The 2009 Hathaway Brown Intel Science Talent Search semifinalists, all members of the HB class of 2009, are:

Lizzie - for designing, building and programming a search-and-rescue robot with mentor Dr. Wyatt Newman of the Case School of Engineering.

Caitlin - who made a microelectrochemical biosensor for fast and simple diagnosis of heart attack, under the guidance of Dr. C.C. Liu of the Case School of Engineering.

Dora - for her research on using micro layers of modern polymer materials (layered polymeric systems) to create a substitute for the crystal component of lasers, thus resulting in better lasers. She worked with Dr. Ken Singer of the Case Department of Physics and CLIPS NSF Center.

Julie - for researching neuroscience and stem cells, such as repair or regeneration of cells in the brain, with Dr. Bob Miller of the Case School of Medicine.

Each of these semifinalists is a member of HB's signature Science Research & Engineering Program, which is overseen by Patricia Hunt. As semifinalists, each has been awarded $1,000 for herself and $1,000 for the SREP.

In a few weeks, they will learn if they will advance to the weeklong Science Talent Institute in Washington, D.C. There, students have the opportunity to present their research projects to the general public and members of the scientific community at the National Academy of Sciences, meet with distinguished government leaders and participate in a rigorous judging process.