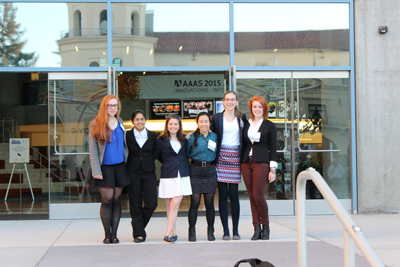 Congratulations to six SREP students who were honored as Melvin Scholars in 2014 by conducting original research at local Cleveland institutions and presenting their work at the Ohio Academy of Sciences last spring. Each student's research earned her a spot at the AAAS Annual Meeting in San Jose, CA, from February 12-15. AAAS (American Association for the Advancement of Science) is the largest scientific professional organization in the U.S.

They were among a total of 135 high school students from 24 states who earned the right to present posters of their research at the AAAS, which is attended by thousands of scientists.

Morgan Sutton '15, Medical Research at the CWRU School of Medicine

Emily Spencer '15, Polymer Research at the CWRU School of Engineering

This distinguished group of six joins 35 previous HB students whose work was accepted by the AAAS over the past 16 years. They were also honored with lifetime membership into AJAS (American Junior Academy of Science) and have the opportunity to publish their research in Chronicle of the New Researcher (CNTR), a new referred journal of Sigma Xi, The Scientific Research Society. All have been members of the school's Science Research & Engineering Program (SREP) in which students conduct research in real research labs under the mentorship of professionals for two to four years of high school.

Congratulations to these students!