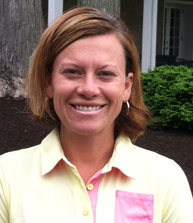 Hathaway Brown School has named Jennifer Creech new Head Varsity Girls Golf Coach. Creech is a native of North Royalton, Ohio. She graduated from North Royalton High School where she earned varsity letters in basketball, softball and golf. She continued her education at the University of South Alabama where she earned a golf scholarship and played for four years on the Lady Jaguars team. At South Alabama, she was a First Team All-Conference selection all four years, winning multiple Division I events. In 2012, she was elected to the University of South Alabama Athletic Hall of Fame.

After graduating from college, Creech worked at Mayfield Country Club and obtained her PGA Class A Certification in 2004. She has worked at Mayfield CC as well as Sand Ridge Golf Club for 13 seasons as a teaching assistant. She now works at The Country Club in Pepper Pike. She is married to Matt Creech, Head Professional at Sand Ridge GC, and has two sons. The family resides in Chardon, Ohio.