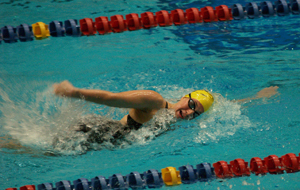 Congratulations to Claire Pavlak '08, an outstanding swimmer who achieved an Olympic Qualifying Time in the 50-meter freestyle on March 25, 2012, at the IUPUI Natatorium in Indianapolis, Ind. during official time trials following the 2012 Division III NCAA Championship Meet. She will be competing in the Olympic Trials to be held in Omaha, Neb. from June 25 through July 2, 2012, for a spot on the 2012 Olympic Swimming and Diving Team.

Pavlak is now a senior at

Emory University, majoring in Anthropology. She was a member of the Blazer Varsity Swim Team during her time at HB, and she has been a member of the Emory Swimming and Diving Team for four years. During that time, the team has won three NCAA national championships. In Pavlak's Emory career, she has earned a total of 20 All-American honors (the second highest in Emory history), as well as nine NCAA National Championships, an all-time record at Emory.